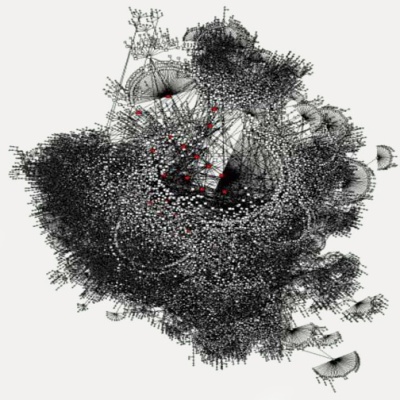 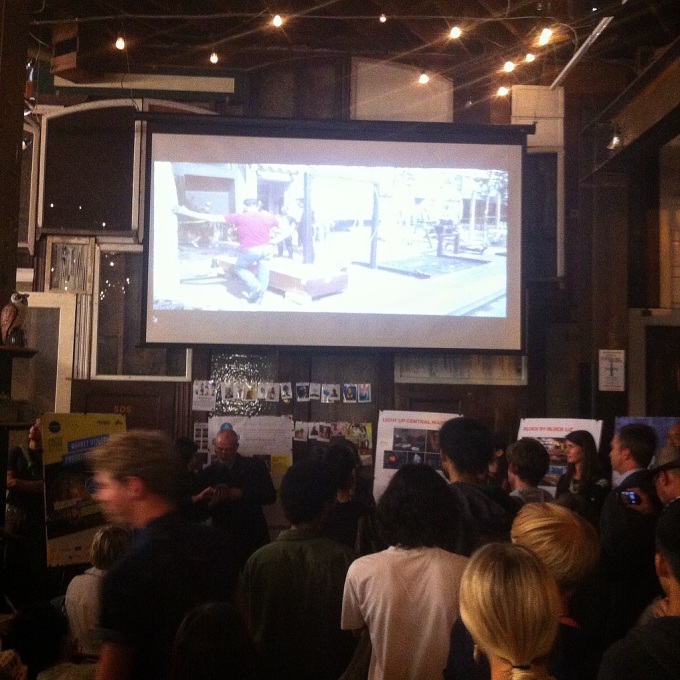 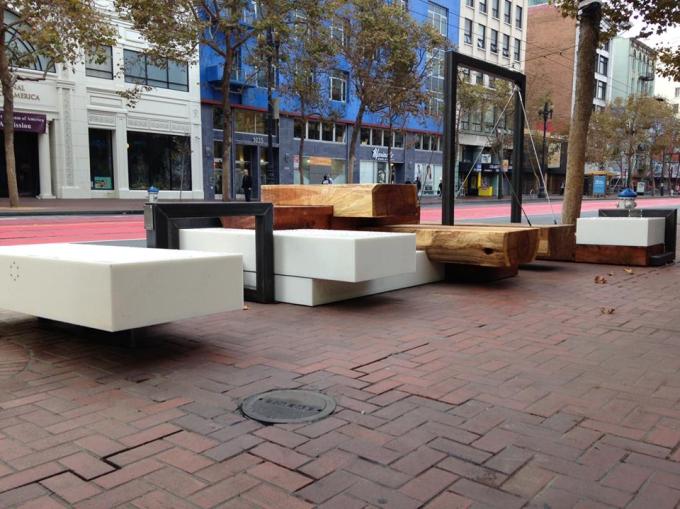 Yesterday, we experienced three different modes of public engagement. We started our meeting at one of the POPOS (Privately Owned Private Open Spaces) at the 1 Kearny building. We then headed to meet with Mona Caron, a visual artist, muralist, and illustrator residing in San Francisco. After hearing talk about her process, we headed to the event “Flipping the Switch to Light Up Central Market.”

POPOS: The Secrets of San Francisco
Weeds by Mona Caron
A Brush With the Tenderloin
SF Chronicle article about the “Light Up Central Market” event 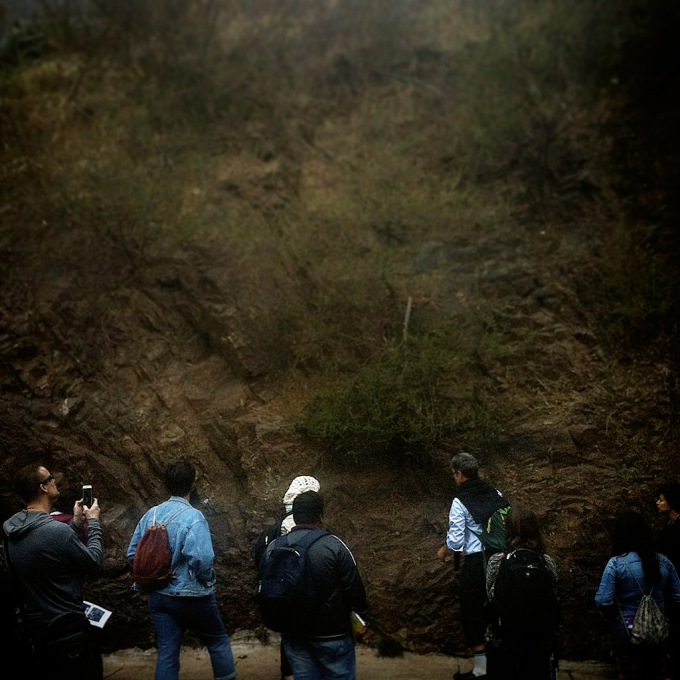 Yesterday, we started our meeting by shortly performing as loiterers at 16th and Mission St. After taking a few notes about or observations we moved towards Dolores Park to meet Nick Marzano despite the unfavorable weather conditions. Once gathered under a tree to avoid getting wet, Nick introduced us to the photographic field work he has been doing. He was full of fascinating stories about the characters he has been meeting in recent months. Talking about being uncertain and being in between, we browsed through excerpts about the blasé look from “The Metropolis and the mental life” by Georg Simmel and “Metropolitan encounters” by Joanna Zylinska (bellow this post.) Replete with questions, we parted to meet Christopher Lewis at Corona Heights. There, Christopher gave us an introduction about the area we were standing at, anthropogenic bioturbation, Franciscan terranes, the Gray Brothers Quarry at Corona Heights, sedimentation rates for chert, and earthquakes.

Nick Marzano is a creative director, writer, and independent researcher living and working in San Francisco. 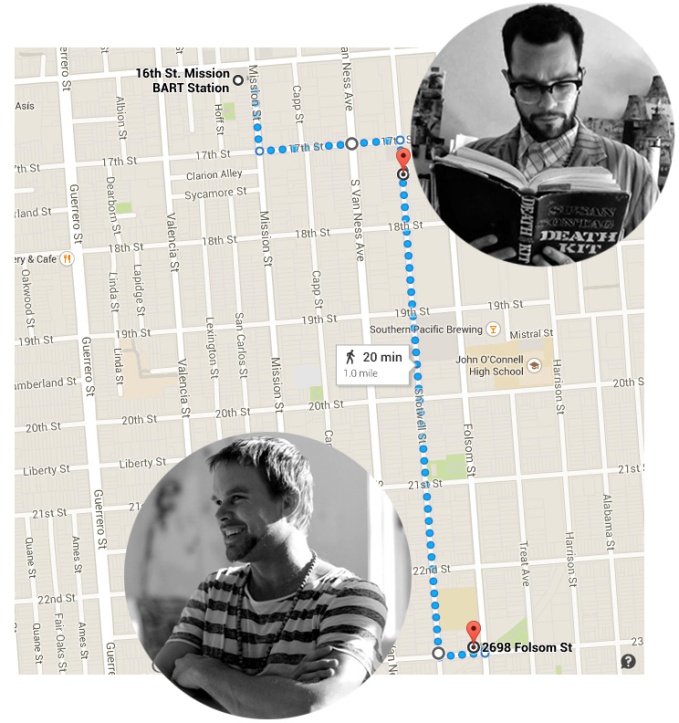 Today we started our walk at the 16th and Mission BART Station, and headed to The Cranium Corporation to meet Angel Rafael “Ralph” Vázquez-Concepción. He is an independent curator from Puerto Rico based in San Francisco, California. His work oscillates between the rigor and structure of writing and architecture and the controlled chaos of scientific experiments and multimedia art installation. His projects range from exhibition design to community based work and generative art, and is a strong believer in art as a radical tool for education and innovation. We then moved to The Red Poppy Art House to meet with it founder Todd Brown. Todd is an interdisciplinary artist engaged in performative inquiry and visual arts. As a visual artist, Brown has 25 years combined experience in oil painting and mixed media, with 11 years professional teaching experience. The Red Poppy is a neighborhood center for the intersection of cultural and inter-generational artistic engagement located in the heart of San Francisco’s Mission District. The Poppy is an artist-driven organization that seeks to empower and transform society by addressing current social issues that impact our community and society at large through creative processes.

Special Thanks to “Ralph” Vázquez-Concepción, Todd Brown, and Arezoo Islami. 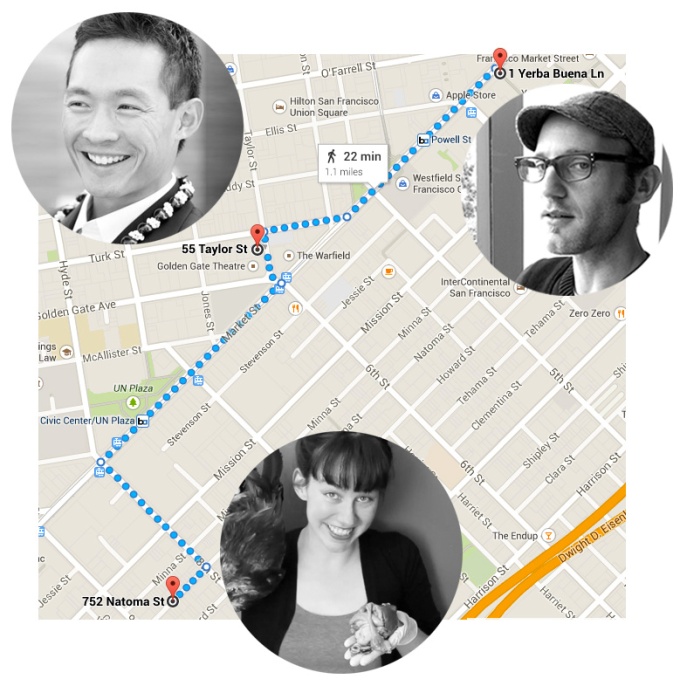 Today we started our walk at Yerba Buena Lane to meet Paul Chasan from Living Innovation Zones (LIZ). Paul is an Urban Designer/Planner for the San Francisco Planning Department. Among many of the project he is involved in, he spoke about Better Market Street SF, Pavement to Parks, and the Urban Prototyping Festival. Then, we walked towards the Center for New Music to meet Adam Fong. Adam is a Composer, Performer, Arts Administrator, Executive Director at the CNM, and co-founder of Emerging Arts Professionals/San Francisco Bay Area, a network dedicated to the development and growth of next generation arts and culture workers. Finally, we migrated to The Body Appropriate to talk to Stephanie Bailey, its founder. Stephanie is an Artist, Performer, Curator, and Museologist currently working at The Exploratorium. Among many of her practices, she works as an eye recovery technician, specimen preparer and taxidermist.

Special Thanks to Paul Chasan, Adam Fong, and Stephanie Bailey.

– Start and finish at 16th street and Misson street.
– Headed down Mission to Clarion Alley, took a right up to Valencia.
– We then turned left down to 18th street and turned right.
– We followed 18th to Dolores Park and grabbed ice cream at Bi Rite Creamery.
– Ice-cream in hand we were told to think about elevation and sidewalk changes as we walked the next few blocks
– We then travelled back on Dolores to 16th street and turned left toward Corona Heights and the Castro.
– We crossed Castro and walked up 16th to the top of Corona Heights stopping to meet geologist Christopher Lewis at Flint.
– Ice-creams no longer in hand.
– Chris took us around the hill top to see different views and left overs from earthquakes indicating geological movement as well as rock outcroppings to better illustrate what he was explaining.
– He explained the view we saw from the top of the hill illustrated where faults exist by tracking where hills came up from flat. For example the hills we looked at across the bay start at the Hayward fault.
– He briefly spoke about the past topography of the Mission district (with a lake, and how Mission Creek used to rune straight through the middle, and most importantly that the mission was marsh land that led to the bay.)
– He told us the two main environmental hazards in California were landslides and earthquakes, but knowing the past topography of the mission, soon with rising sea levels flooding will also be an issue.
– He then explained that the street names are embossed on the corners so that people can navigate in a catastrophic situation. (Post 1989 Urban Plan)
– We talked about how much of the city is built upon fill, sunset and marina are on sand, while much of the Mission, Embarcadero, Soma, Bay View, and Hunters Point are landfill.
– He then set into the rock that dominantly exists in SF. Mostly mesozoic sedimentary and Serpentinite (California state rock), all of which is oceanic and originated on the sea floor.
– Explaining further that sedimentary chert is old sea floor compressed shells and debris, while Serpentinite is ocean cooled mantle. [Mention of Pulgas Water Temple in south bay and Sunol Water Temple in east bay.]
– He showed us the side of the sedimentary rock we were in front of to display a fault that was uncovered by quarrying in the area many years ago.
– Went on to explain how 280 highway and skyline (highway 35) trace the San Andreas Fault, the fault moves offshore north of there in Pacifica, and back on in Bolinas following up through Tomales Bay, Dog-patch and Potrero Hill are Serpentinite outcroppings.
– Last tie bit: Rip wrap in surf at ocean beach contains old tombstones from cemeteries moved to Colma in the 30s and 40s.
– We then followed the same path back to 16th and Mission.